The secrets keep getting solved at a rapid pace as the Baa’l pet led to more sleuthing. We’ve known about the

Waist of Time for a while now and wondered where it would be appearing from, and today we found out! As usual, the WoW secrets Discord was hard at work and managed to discover and go through all 23 steps in order to obtain the cosmetic belt. This particular secret hunt doesn’t seem to lead to more, at least for now, and since we’ve found out that

The Hivemind isn’t actually in the game, this could be it for the secrets so far, or it’s now a matter of going to the right place with the Waist equipped.

The process of getting the belt requires you to have Baa’l from the previous secret hunt and then go clicking a whole lot of hidden objects, in order, in many various locations throughout Azeroth, from Spires o Arak, through Blackrock Mountain and finishing up in Feralas. Then it’s on to Grimmy the tiny skeleton who will lead you the rest of the way. You can check out the full guide and go grab your belt over at Warcraft-secrets.

The belt was also, shall we say… emasculated during beta, as it used to look like this: 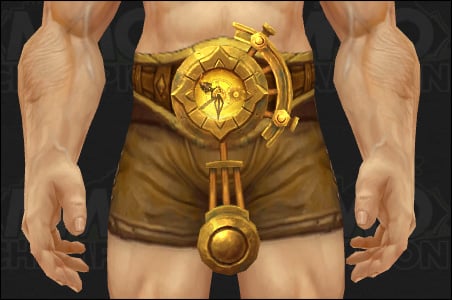 And here’s the waist in action: