The 2018 Summer Games are here, featuring 50 new cosmetics, Lucioball and a lot of Hero tuning.

The 2018 Summer Games have arrived and will stay until August 30th! We have over 50 new seasonal items, including the already announced legendary skins, more Lucioball and a large amount of Hero changes.

First off it’s the Hanzo, Widow, Brigitte and Mercy nerfs as well as Ana, Lucio and Moira buffs, with Zarya getting a bit of both. And then it’s the usual bevy of bug fixes, with gems such as D.Va’s disappearing gun while hooked and emoting, Hanzo’s detachable arm while wall climbing and more!

Then there’s all the new skins: 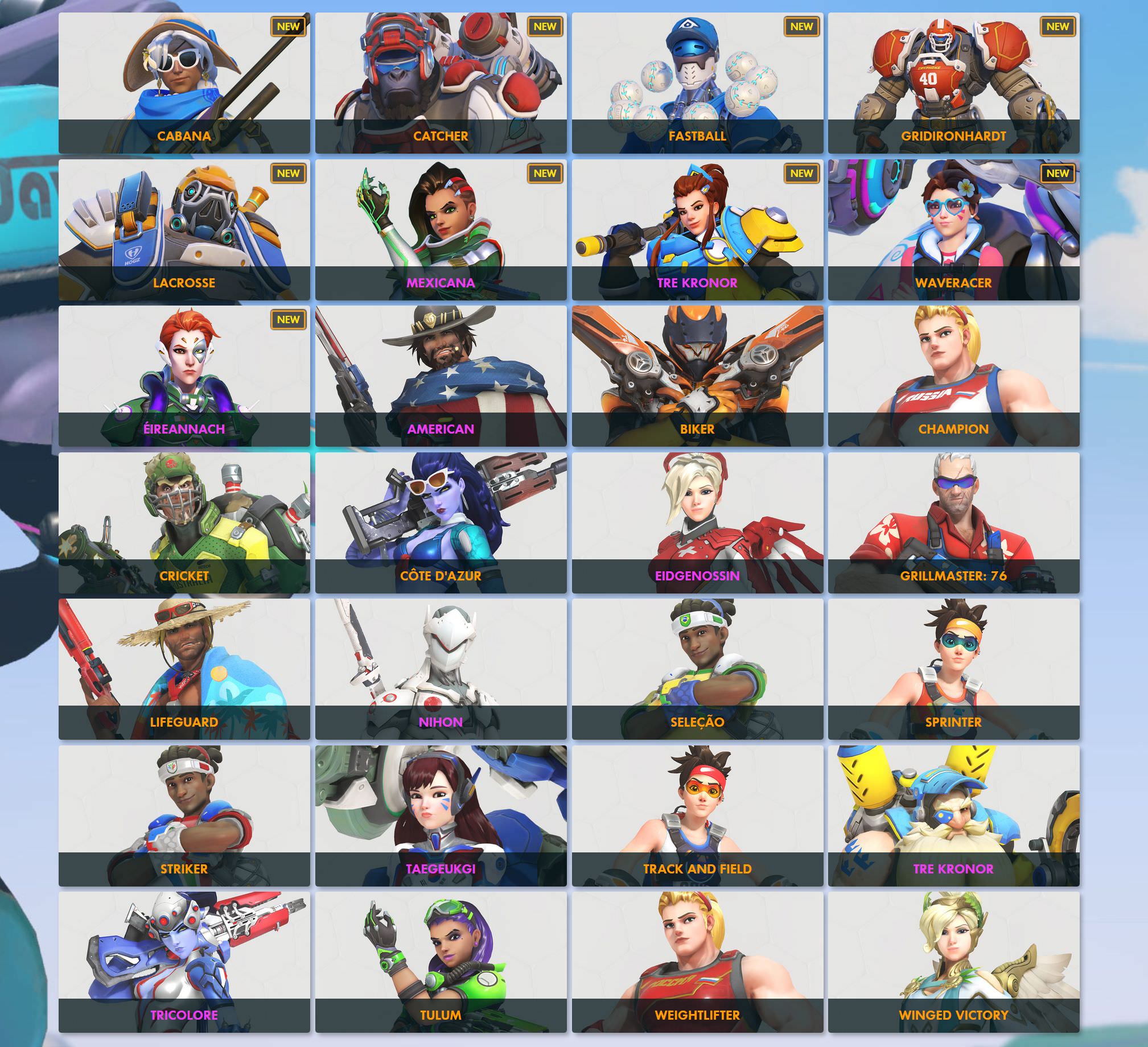 And then we have the short version of all the Hero changes, courtesy of itsjieyang:

The Summer Games return for more fun in the sun! This year, we’re celebrating the spirit of competition with a new Lúcioball arena, Season 2 of Copa Lúcioball, and a smörgåsbord of loot. Unlock over 50 new seasonal items—including legendary skins like Waveracer D.Va, Fastball Zenyatta, and Cabana Ana—alongside our growing collection of summer gear from previous years.

Developer Comments: These changes help Ana’s Nano Boost be usable in more situations. Previously it was almost entirely used to combo with other allies’ ultimates, just before they use them. With this change Nano Boost can now alternatively be used to save an ally from near death in the middle of a big fight.

Developer Comments: Brigitte’s Shield Bash is one of her strongest abilities, and its short cooldown can make it difficult to play against. Slightly increasing its cooldown will give her opponents more opportunity to play around it. We’ve also added an option to control Brigitte’s Repair Pack targeting sensitivity which will allow players to reduce the width of the search angle for the ability. This is useful for trying to target specific allies in the middle of a fight at the cost of making it a bit harder to target allies in general.

Developer Comments: These changes are just quality of life improvements for how Doomfist interacts with Symmetra’s placed objects.

Developer Comments: Hanzo’s Lunge ability allows him to be a bit too evasive, so we’re increasing the cooldown to make him easier to catch.

Developer Comments: Increasing the amount of shield health gained from Lúcio’s Sound Barrier should make it more effective against incoming burst damage. As part of his last rework, Crossfade’s radius was heavily reduced, but its potency was increased to compensate. While the change was better for him overall, the radius was small enough that it was often difficult to keep his allies in range during a fight, even if they felt reasonably close together. The increased radius should help in these situations.

Developer Comments: Mercy’s previous healing output made her nearly irreplaceable in any team composition. Even after this change she will still be able to deliver more healing over the course of a match than any other support hero, but it should allow for other healers to be more viable.

Developer Comments: This change should help Moira in situations where there are no enemies within reach but your team still requires a lot of healing. She will still need to drain enemies to be fully effective, but this just helps her a bit in the rare cases where there is an extended long-range fight that she can’t reasonably take part in.

Developer Comments: By smoothing out Reinhardt’s Barrier Field, he now will be able to consistently block enemy abilities and projectiles that could sometimes unintentionally sneak through (e.g. Junkrat’s grenades).

Developer Comments: The head changes are mostly a bug fix, as her head hit volume was abnormally large, especially from behind. Previously if you fired at her from behind near her upper spine, you could land a head shot. Now her head volume is much more accurate.

Developer Comments: Symmetra’s primary fire has huge damage potential but it is too difficult to charge because of its low range and slow charge rate. We’re increasing the range to see how it plays out, giving her more opportunities to use it, especially against enemy barriers.

Developer Comments: The increased cooldown will slightly reduce the frequency that Widowmaker can reposition herself. This allows her to be threatened more easily by agile enemy heroes such as Winston and Genji.

Developer Comments: The smaller radius on Graviton Surge makes it more reasonable for her enemies to try countering it by staying spread out, as well as putting more focus on Zarya to position the ultimate correctly to impact the most players possible. However, the intent of these changes isn’t to lessen Zarya’s overall power significantly so we’re reducing her energy drain rate, which should keep her energy higher on average resulting in more damage and quicker ultimate charge times. Overall, this takes some power out of her ultimate and distributes it else ware to add more counter play against her.